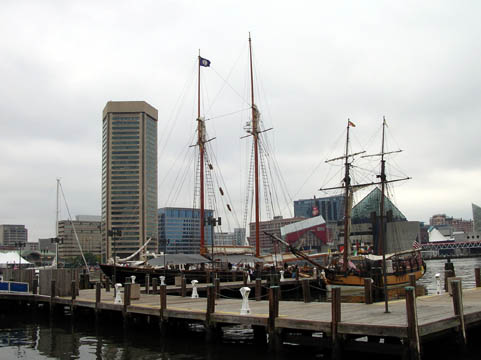 The schooners Sultana and Virginia in the Inner Harbor with the World Trade Center and National Aquarium in the background. They were in Baltimore for the Great Chesapeake Bay Schooner Race. 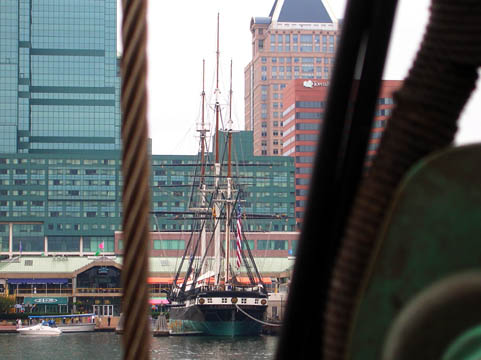 The USS Constellation from the deck of the Virginia of Norfolk. 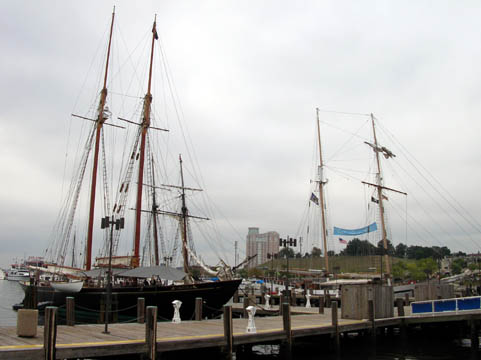 Virginia, Sultana of Philadelphia and Clipper City on a heavily overcast October day following the first significant rain of the month 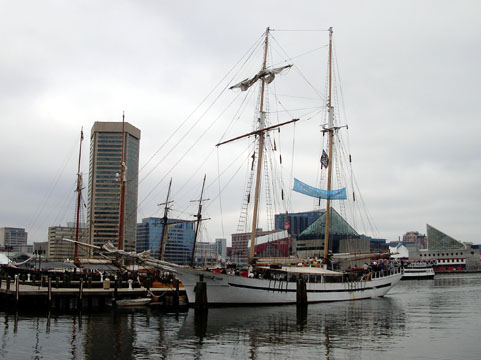 The three ships from another angle, with the National Aquarium in the background. They would all sail three days later in the race. 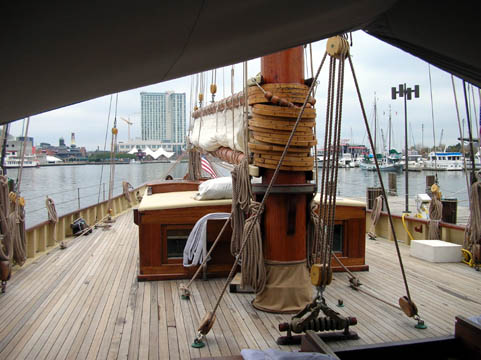 Looking at the harbor while keeping dry from drizzle on the Virginia. The ship's pumps and vacuums were working. 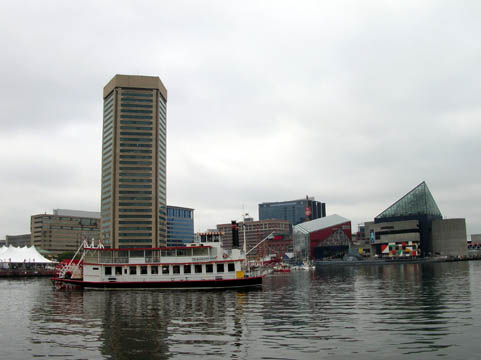 The Black-Eyed Susan in the Inner Harbor. I have never seen this kind of riverboat so close to Harborplace and the aquarium before. 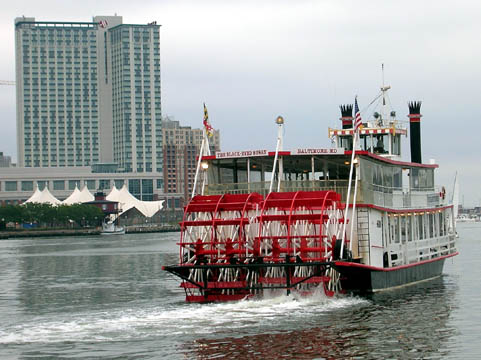 Baltimore's Black-Eyed Susan is named for the Maryland state flower despite not being yellow and black. 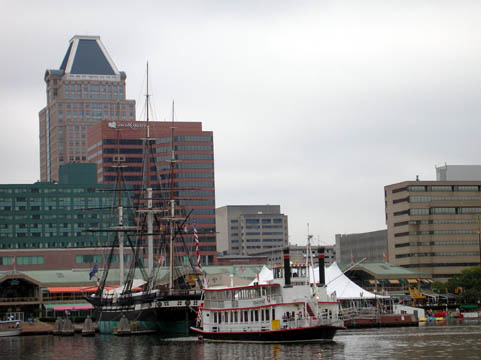 The 150-passenger replica of a paddlewheel-driven riverboat docks in Fells Point but was apparently making a run to show passengers the Inner Harbor on Sunday. Here she is with the USS Constellation. 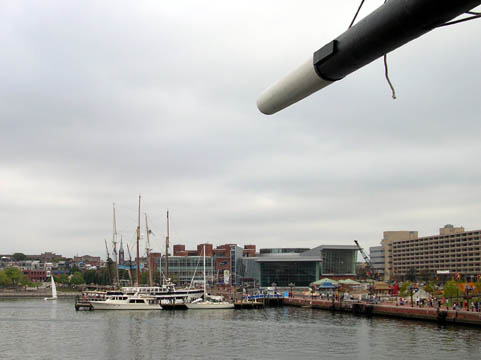 Looking at the schooners and the Maryland Science Center from the USS Constellation's stern. 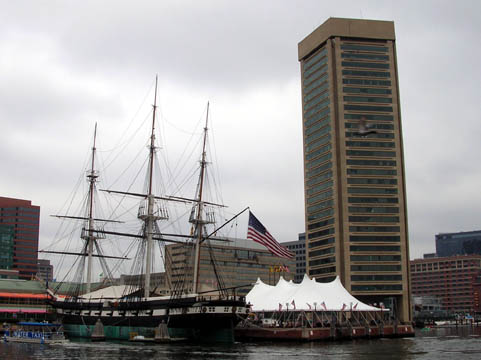 The Constellation beneath a blur of seagull flying in front of the World Trade Center. The museum has a new audio tour and the ship has several new exhibits -- one on stopping the slave trade, one on the officers' quarters which are now in a much greater state of repair than the last time we were there (the gunroom had been closed and the quarters used for storing restoration equipment). It was a gorgeous day to be on deck, since we could see and hear Baltimore's Columbus Day parade going by -- there were many floats celebrating the culinary delights of Little Italy! 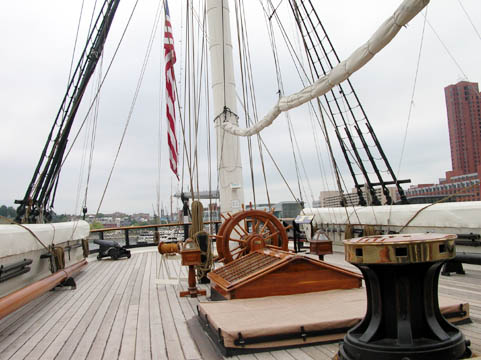 Aboard the USS Constellation, a view of the capstan, the wheel and the mizzenmast. 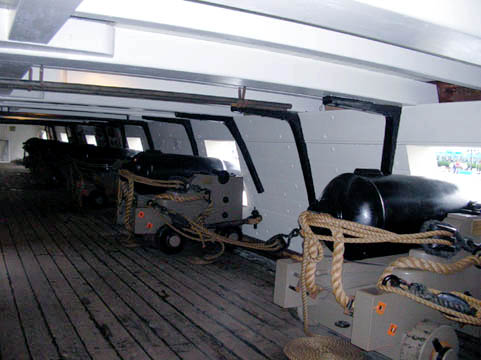 The floor of the gun deck was wet in many spots after heavy rains the day before. 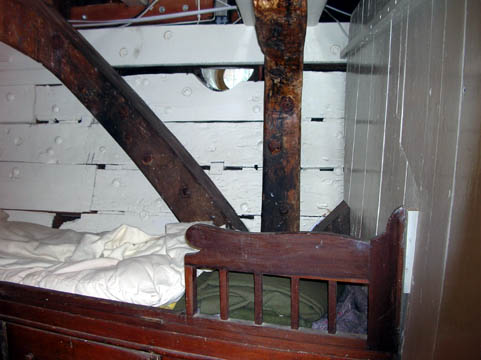 The great cabin and rooms off it have always been open since we've been visiting, but the crew quarters have mostly been roped off for renovation. Here is the purser's bunk, now accessible. 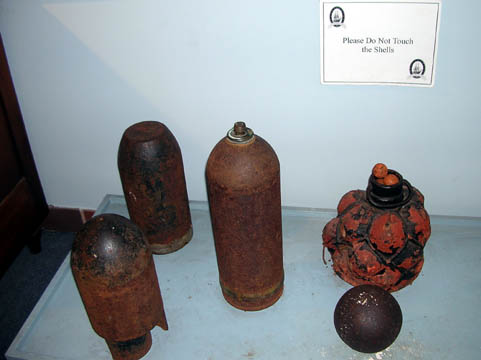 Shot and shells from the Constellation's fighting days. 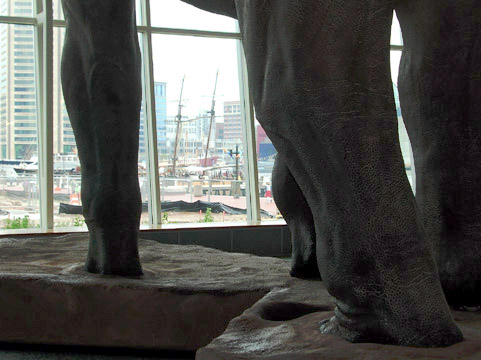 The schooners between the legs of one of the model dinosaurs at the Maryland Science Center. 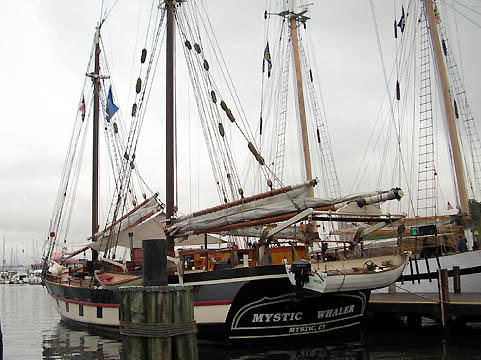 Mystic Whaler docked next to Clipper City after the race on October 22nd. I had been disappointed when we saw the Virginia and Sultana that the Mystic Whaler and Nathan of Dorchester had not yet arrived, but they were both in the Inner Harbor after the race. 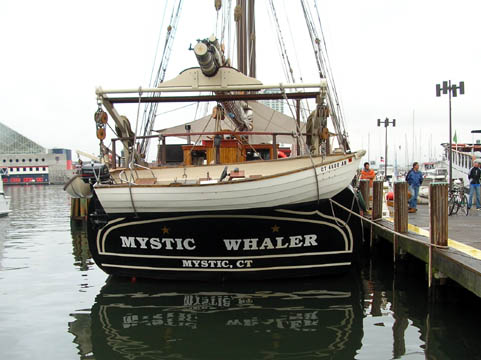 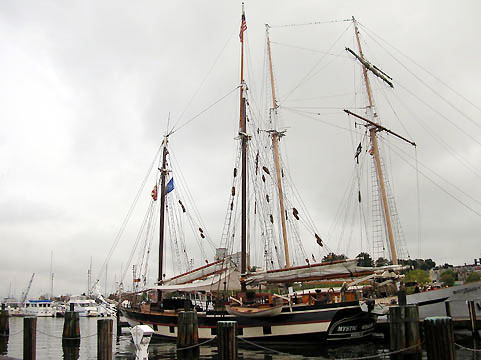 Here's a full view of this very pretty windjammer, which Clair and Cinda said they had seen often while sailing with the Urbans on the Mystic River. 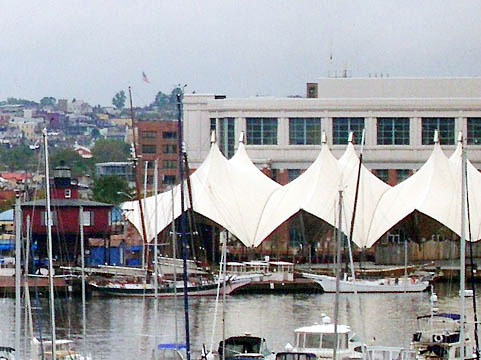 The white ship to the far right rear by the tent is the skipjack Nathan of Dorchester. I believe that the one to its left with the green trim is the Lady Maryland, a Chesapeake Bay pungy schooner which finished fourth behind the Liberty Clipper in the race. The red lighthouse to the far left is Seven Foot Knoll Lighthouse -- oldest surviving screw-pile lighthouse that operated on the Chesapeake Bay -- built in 1856 to mark the Seven Foot Knoll shoal, now a part of the Baltimore Maritime Museum.