The two Du Pont estates, Winterthur and Longwood Gardens, straddle the Delaware-Pennsylvania border. Winterthur is the mansion built by Jacques Antoine Bidermann and Evelina Gabrielle Du Pont, where the house's fifth owner, Henry Francis Du Pont, collected American furnishings and arts and crafts that he long intended to turn into a museum. We walked through the extensive gardens and took the house tour, which covers less than a fourth of the actual rooms. The original family fortune was made selling improved gunpowder during the Civil War, and the collection amassed with the inheritance is astonishing: a Gilbert Stuart painting of George Washington, a set of dishes owned by the Washingtons, a set of tankards made by Paul Revere, the Monroe china from the White House (one of 50+ sets of china), a closet filled entirely with candlesticks, a room of Empire furniture, lots of early American cut glass and musical instruments. The grounds have an Enchanted Woods section with a stone circle, labyrinth, faerie cottage and lots of other neat things for kids as well as spectacular flowering trees. From Winterthur we went to Longwood Gardens across the Pennsylvania border, where Pierre Du Pont's house is now a museum of horticulture and where there is a massive conservatory, water gardens, topiary garden, azaleas not quite in season and a tower with waterfall. 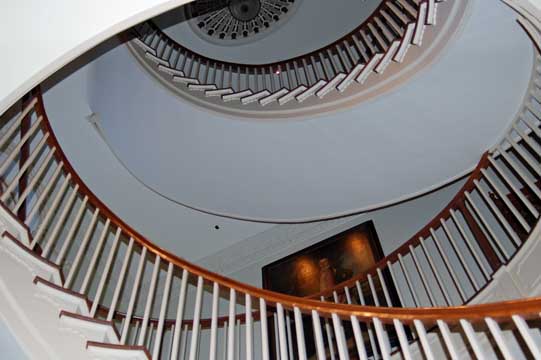 This spiral staircase was brought to Winterthur from its original setting in a mansion in North Carolina to replace the marble one that was originally here, put in by an earlier resident. Henry Du Pont had it built up two additional stories by the woodworkers on the property who had worked on the barns for the dairy farm. 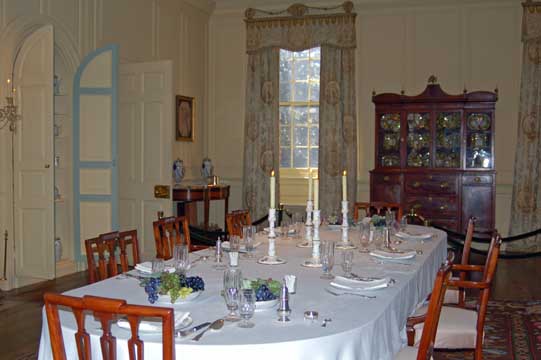 Du Pont amassed an amazing collection of pre-1860 Americana (he felt that everything produced afterward was too industrialized). This is the dining room, set here for the season with draperies and china in spring colors. Du Pont believed in using natural light, so there was no chandelier, just big windows and candles. 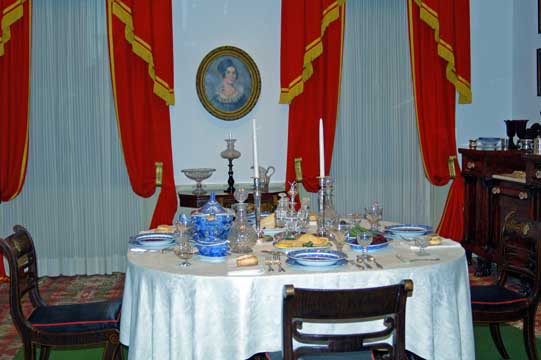 Du Pont also had one room furnished in the style and with the decor of each of the original thirteen colonies; this is the Georgia room. Many of these items were obtained from the estate of the woman in the painting, who will now be with her possessions forever. 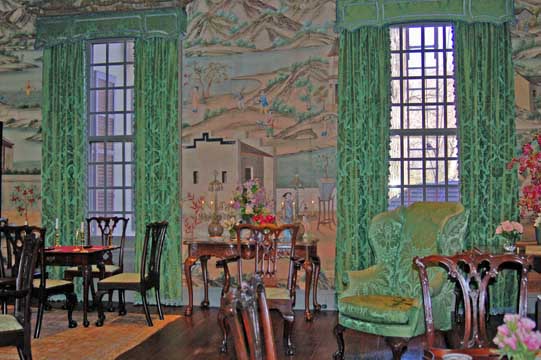 The wall coverings in this room are painted screens from late 1700s China, while the furniture is Chippendale-style with Oriental ornamentation as was popular among wealthy Westerners of that era. The scenes depict Chinese village life and are non-repeating; the areas above doors and windows were painted to match, so as not to miss any of the scenes, and that paint has darkened more than the screens, so that it's easy to tell what was added. This was used as a game parlor -- note the card table in the back left -- and had shelves of gorgeous Asian porcelain vases. 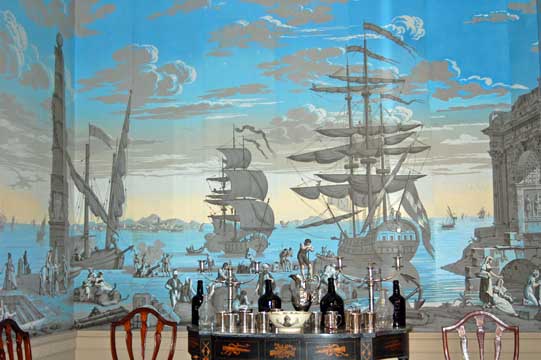 This little drinking room was never really used by the family but was one of Du Pont's decorative showcases. Yet it has my favorite wallpaper. Du Pont also had a collection of paintings of sea battles from the War of 1812, some showing the Americans triumphing, some showing the Royal Navy triumphing. There's a very nice one of the Chesapeake meeting the Shannon in battle. 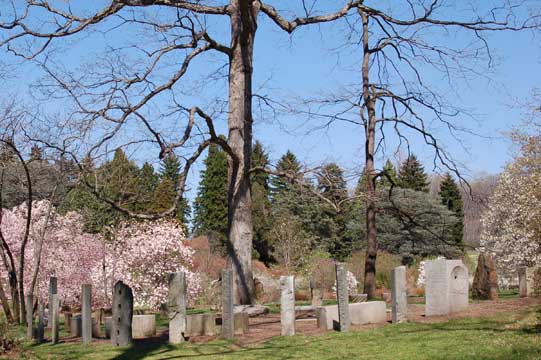 The stone circle in the Enchanted Woods. The widest stone has a Shakespeare quote carved into it, "Tongues in trees, books in running brooks, sermons in stones, and good in everything." 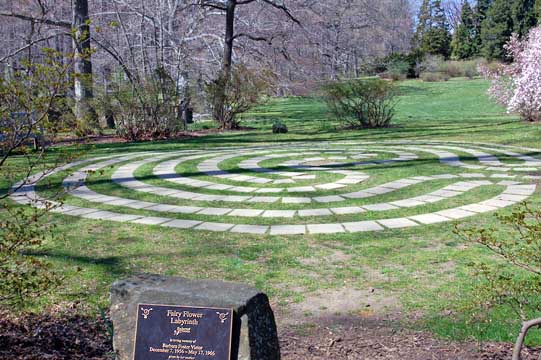 The Fairy Flower Labyrinth, with stones marked with a Navajo blessing about walking in beauty. 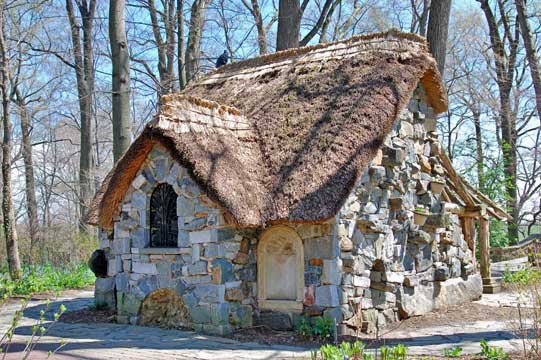 The Faerie Cottage. Inside is an ornamental fireplace with cauldron, a set of mini-thrones and a large carved Green Man on the wall. 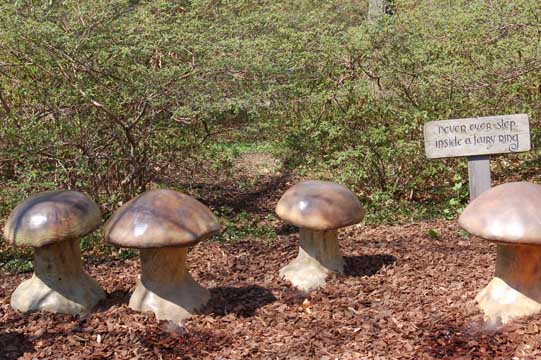 Visitors who step inside this fairy ring in the summer are sprayed with mist from the bases of these toadstools -- if you look at the bottoms, you can see the mist dampening the ground. 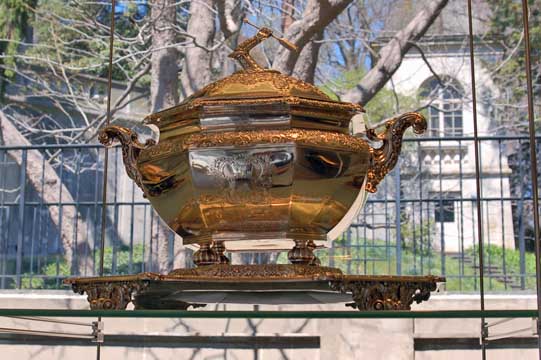 Winterthur is home to The Campbell Collection of Soup Tureens, which are in a beautiful set of rooms with glass on both sides overlooking the estate. 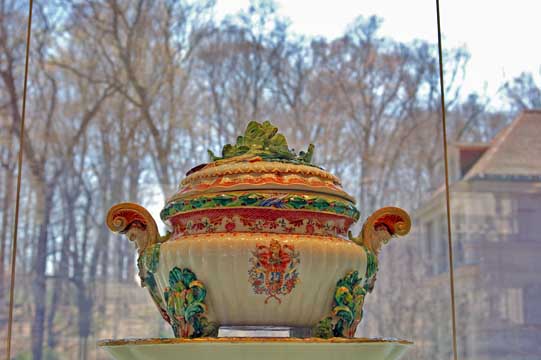 Here, as above, you can see some of the gardens and buildings in the background. The top photo includes part of the mansion. 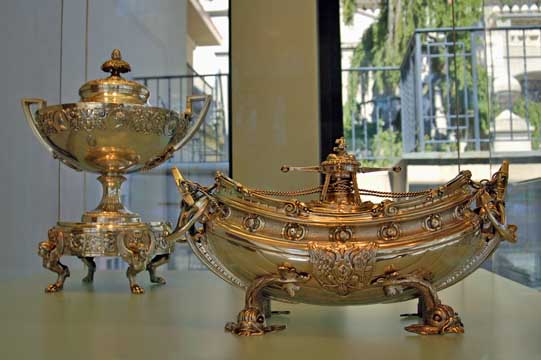 The tureen in the front is based on a wooden-hulled battleship. 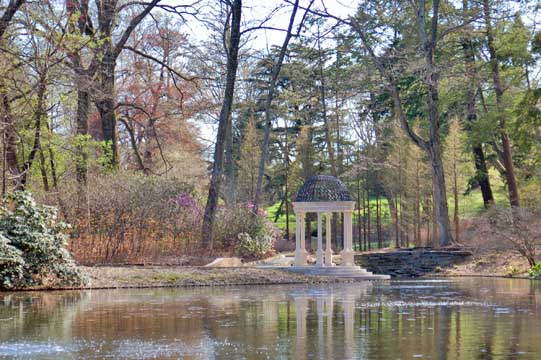 There is a massive water garden at Longwood Gardens. This is one of the lakes. I suspect that when the bushes are in bloom, it will look a lot like Thomas Kinkade's Garden of Prayer. 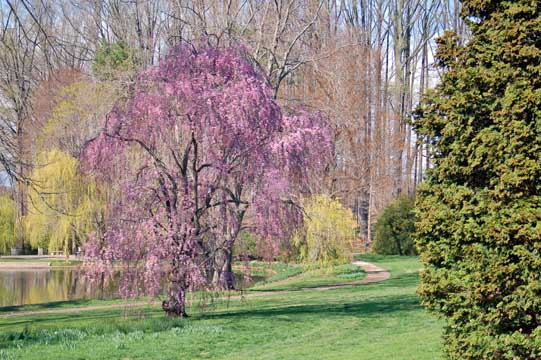 Some of the trees around the smaller lake were in bloom, like this one. 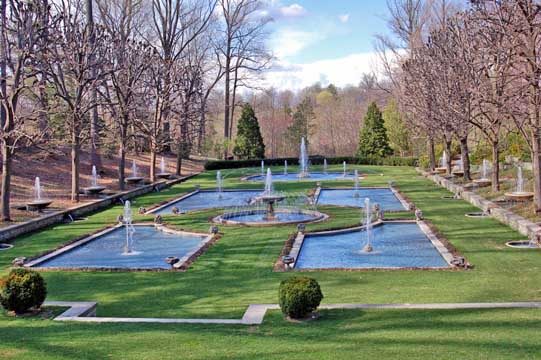 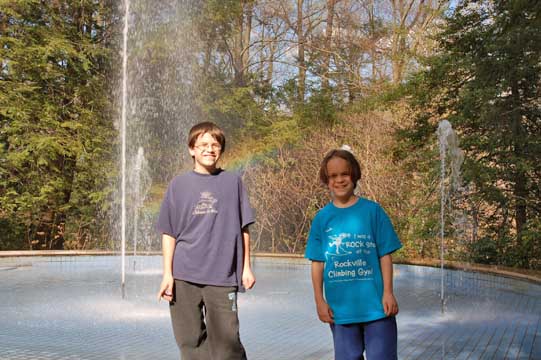 ...create rainbows in the afternoon light. 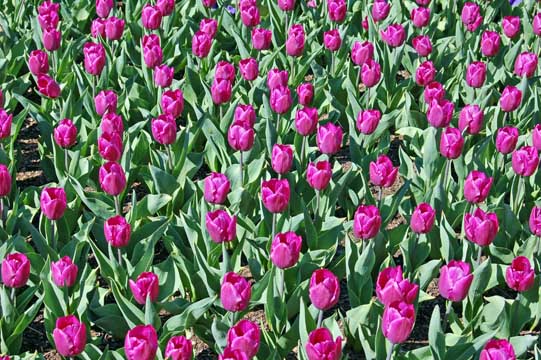 A carpet of tulips spreads in front of the field... 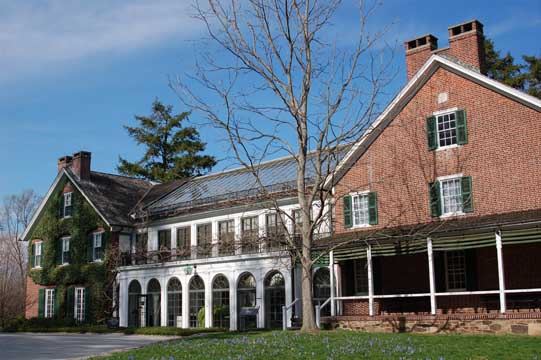 ...leading to one of the old Du Pont houses. 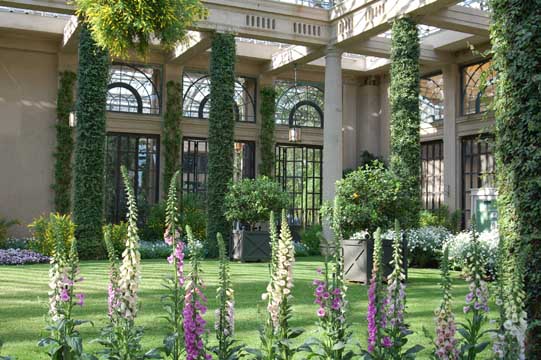 A massive greenhouse displays hundreds of varieties of plants. 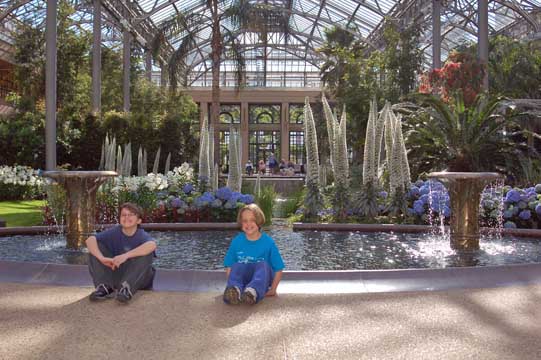 Here are Daniel and Adam in front of one of the many fountains. 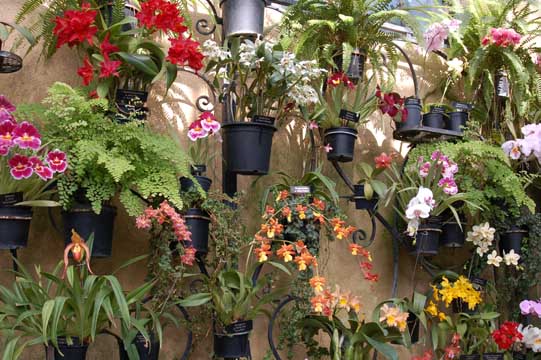 Inside, a display of orchids. 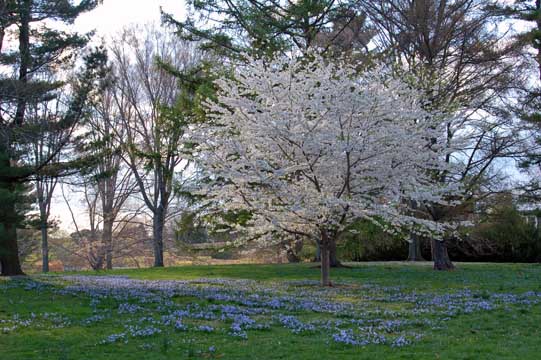 Outside, a flowering tree in the late afternoon light... 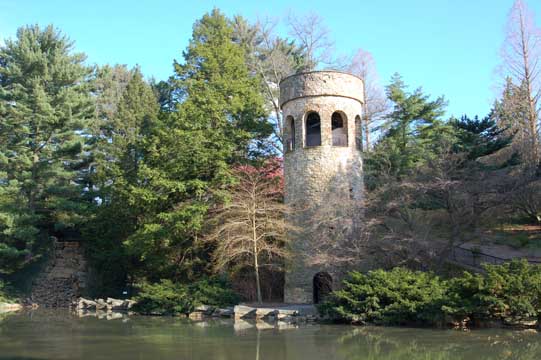 ...and the castle that disguises the filtration equipment.