We spent the day in the Renaissance an hour and a half from Hanover at the Shire of Mount Hope, where we traveled to listen to music, watch theater and revelry, eat turkey legs, cheese sticks and things dipped in chocolate, watch crafts being made, clap along for jugglers and belly dancers and cheer at the joust (mostly for Sir Eric, the Scottish knight fighting for Ireland and Grace O'Malley, though we were a bit sympathetic to the Queen's champion Sir Lucas as he was wearing burgundy and gold -- the colors of the Washington Redskins -- while Sir Eric was wearing purple and white, the colors of the Baltimore Ravens). We saw comic whip work by Don Juan and Miguel, a Pirate Brawl that ended with everyone in a dunking pool, fire-juggling by the Tartan Terrors, pirate magic by Eric Dasher, music by the Burly Minstrels and numerous wandering clowns and performers, plus a swordsmith's shop in a pirate ship, any number of Celtic jewelry designers and period clothing that was not too swelteringly hot as it was under 80 on the shaded grounds.

There could not have been a nicer place to spend a day out of time, nor a nicer time to do it. The Pennsylvania Renaissance Faire has a lot to recommend it: a bookstore in the church building (we met the Archbishop of Canterbury), a glass-blowing studio with regular demonstrations, mazes and rides for younger children, several incense and soap stores that make everything around them smell good, and smoked almond and strudel stands that do the same. We left after the late joust and dragon auction (our kids had already acquired very small dragon puppets but were determined to try to win the $100+ variety), drove home watching one of the miraculous sunsets that this part of Pennsylvania seems to have regularly, and ate a very late dinner consisting of breakfast food since we ate lunch early in the morning and dinner-type stuff in the mid-afternoon. 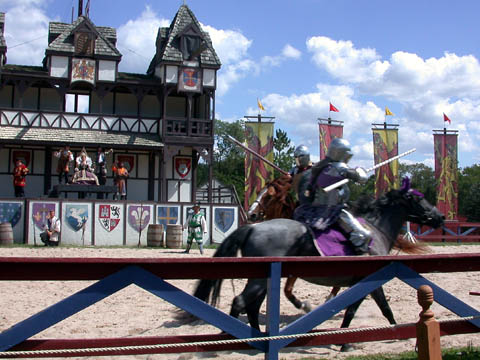 Sir Eric and Sir Lucas were very evenly matched in the early rounds... 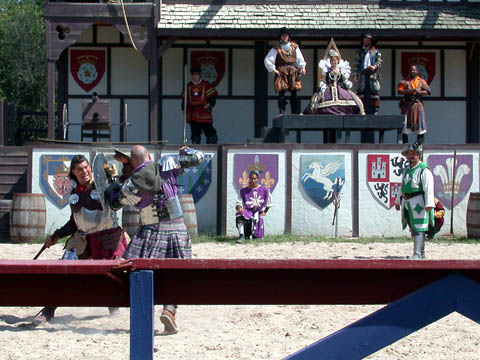 ...eventually knocking and dragging one another off their horses... 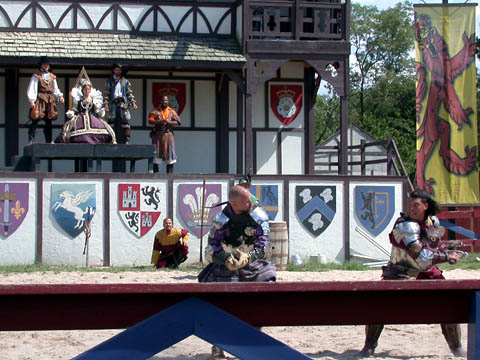 ...and fighting with swords and axes. 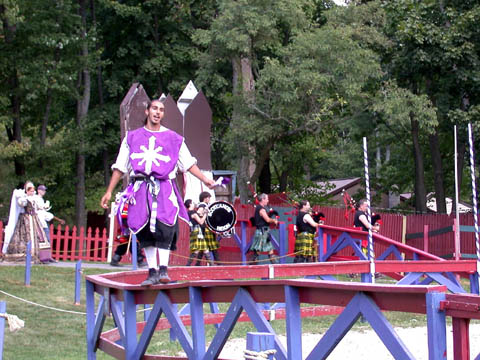 Sir Eric's squire introduces him as, behind him, the Queen is preceded by the bagpipes. 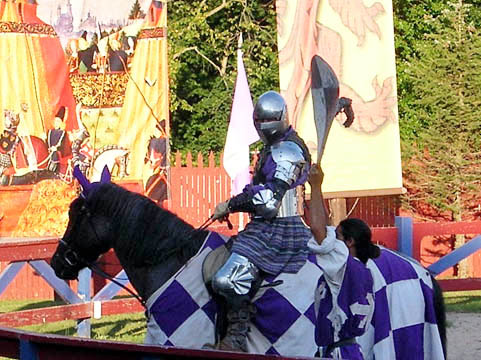 Were there actually Renaissance knights clad in Baltimore Ravens colors? 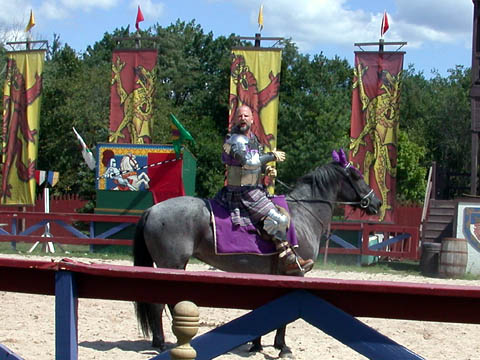 Fiery Sir Eric addressed the crowd throughout and scoffed at British claims of chivalry... 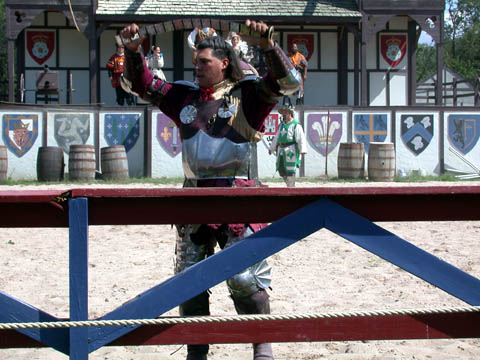 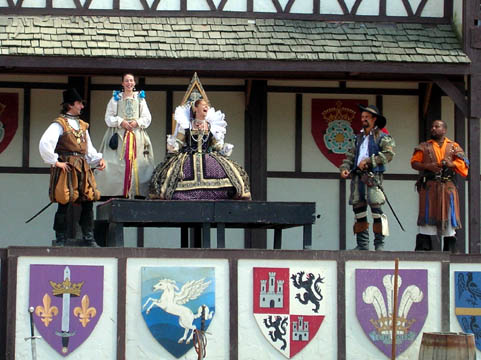 Queen Elizabeth laughs at a joke of Sir Francis Drake's. 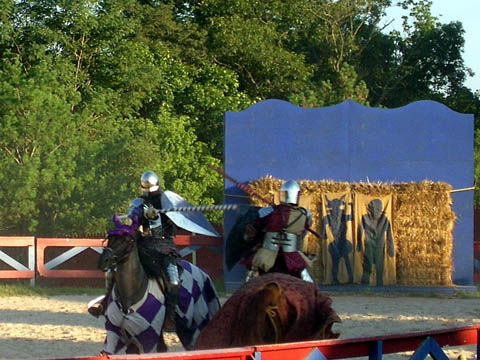 The evening joust-to-the-death resulted in a draw which led to a fight between the English and Irish... 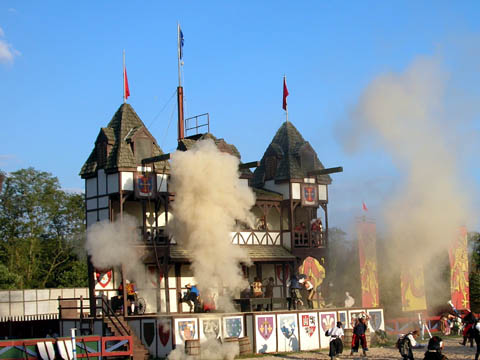 ...resulting in this violence from which the Queen had to be protected. 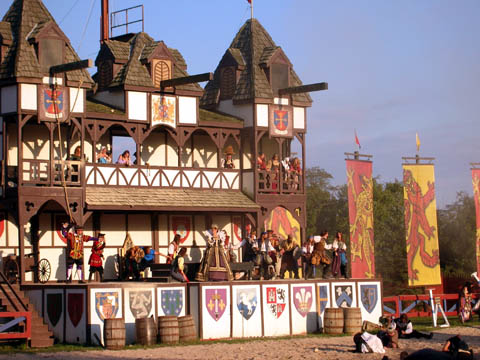 She made a plea to the Lord Deputy of Ireland to spare the life of Grace O'Malley, and order was restored. 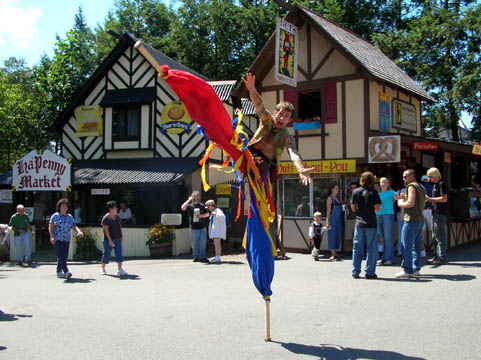 An acrobat on stilts shows off his flexibility. 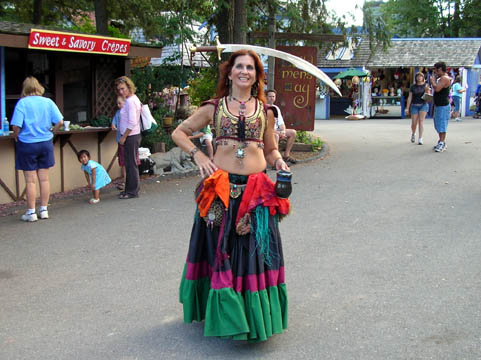 One of the belly dancers balances a sword on her head. 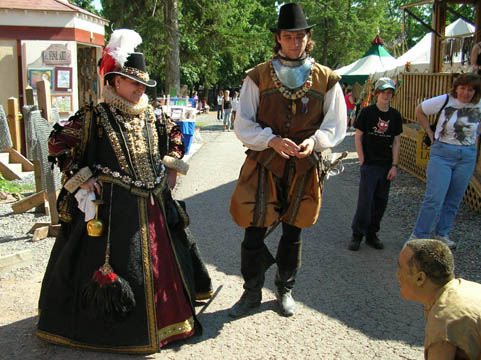 Sometimes, the aristocrats told us, it is necessary to put dirty peasants in their place. 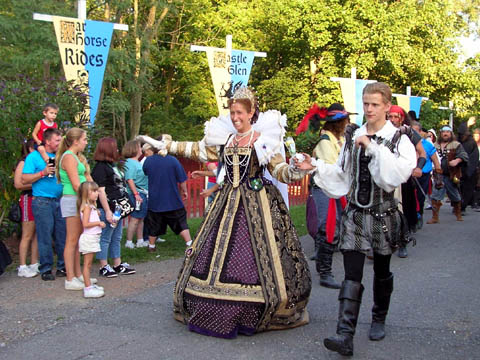 And what is aristocracy without the Queen? 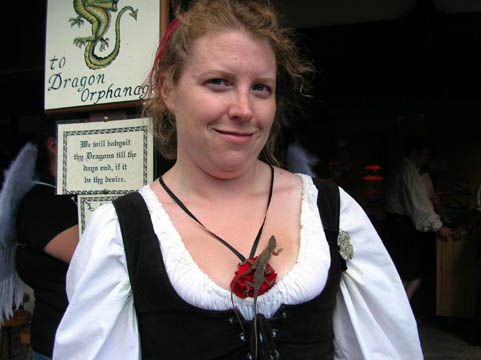 Here at the Dragon Orphanage one can adopt (for a small fee) baby dragons like the ones crawling on the rose in this lady's cleavage. 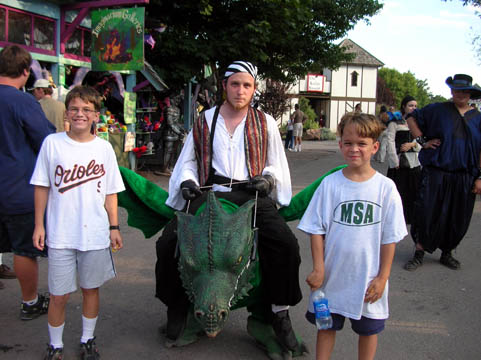 And a big dragon with the boys! 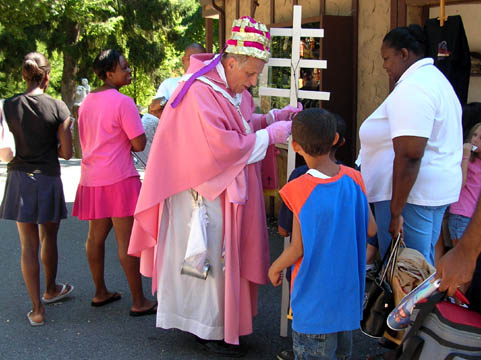 Although there is a great deal of vice and wickedness from the Sultry Sirens of Sin and at the Wench Auction (both adults only events), the Archbishop of Canterbury is there to attempt to save souls. 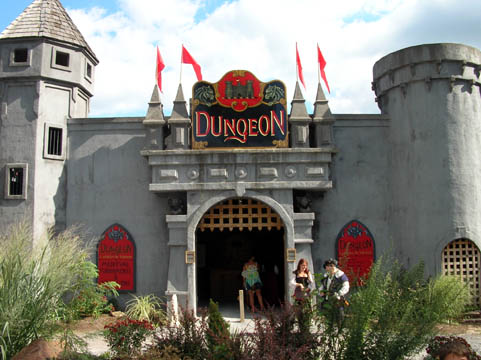 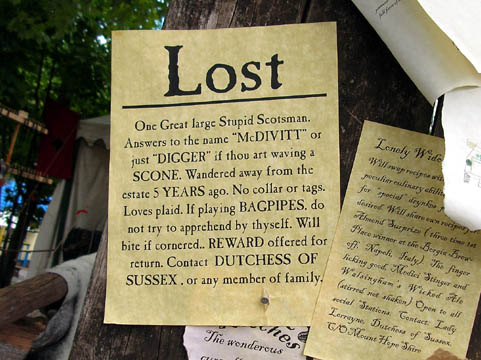 The Dutchess of Sussex has all sorts of problems and is looking for people skilled in Monastery Sacking and Advanced Looting in addition to the above. 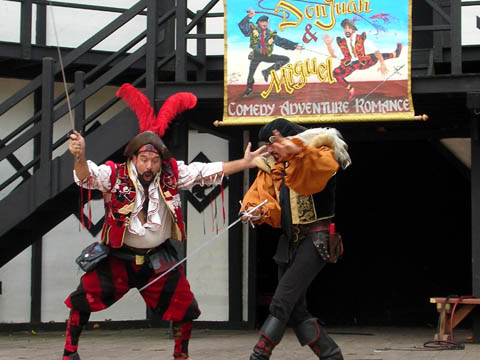 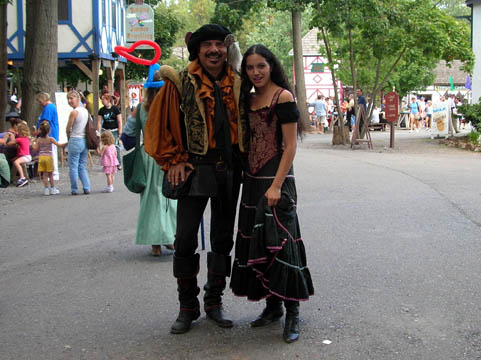 Don Juan and his daughter Esmeralda (not his real name or hers, though she really is his daughter and uses a whip extremely well). He claimed that if people threw money it would go to her college fund. We passed them in the village and they posed for this photo. 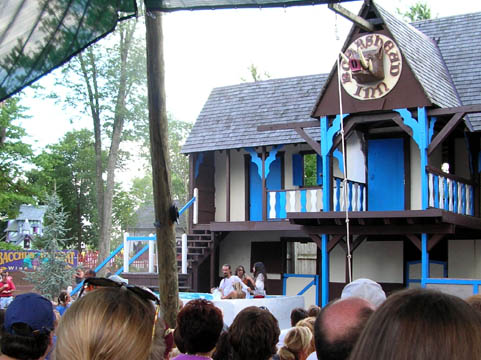 The Pirate Brawl at the Boarshead Inn always ends with everyone falling into the pool. 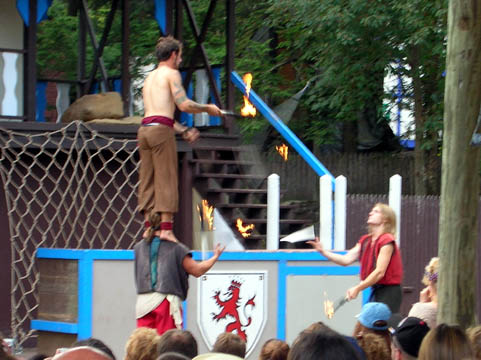 Also at the Boarshead, the three members of Bardic Wind juggle flaming torches and daggers. 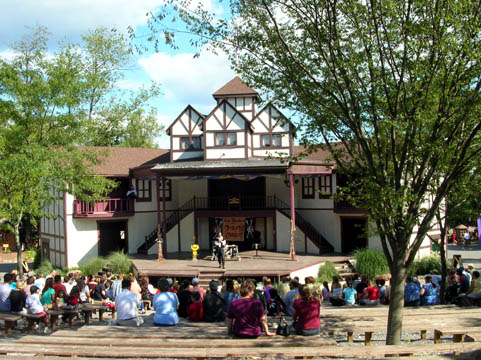 Eric Dasher's Pirate Magic onstage at the Globe Theatre (note the "heavens" billowing down from the overhang). 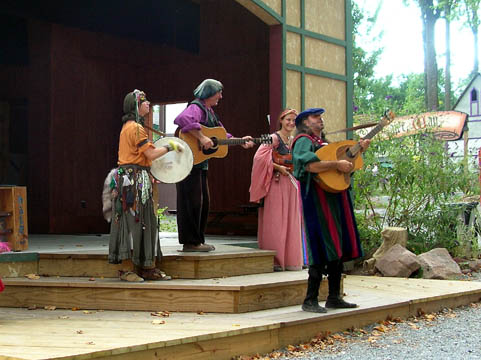 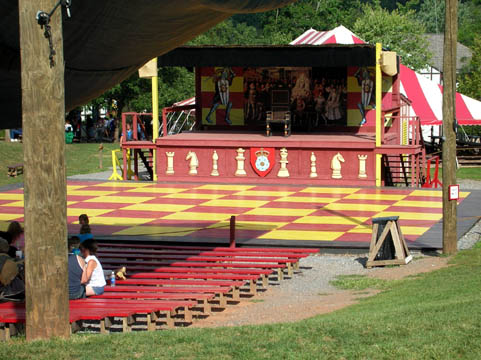 The Human Chess Board. We missed the actual chess tournament as we were seeing Don Juan and Miguel and then Bardic Wind. 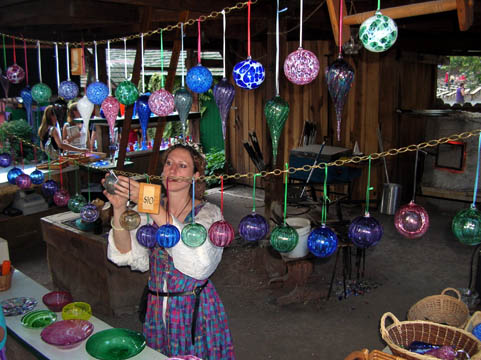 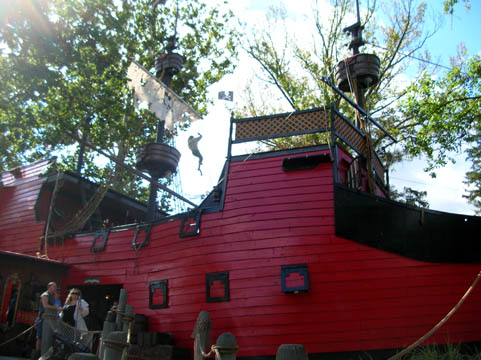 This is not a real tall ship -- it's the pirate ship where Medieval Gallery sells weapons like Maximus' sword.