Breakfast With the Penguins 2010 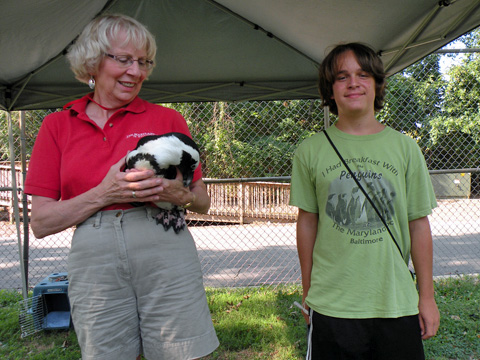 Adam, a zoo volunteer, and the cranky penguin Ascot, who had to do ambassador duty since her sisters were moulting. 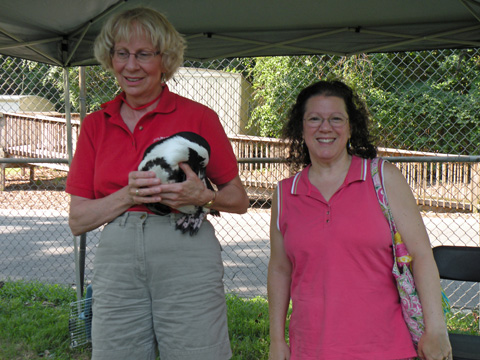 We didn't get to pet the penguin this year because she wanted to be left alone so badly. As in previous years, we arrived bright and early, before either we or the penguins were fully awake... 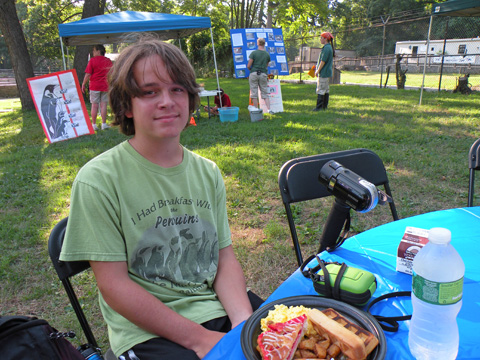 ...and were served eggs, waffles, sausages for the carnivores, potatoes, pastries, fruit... ...orange juice, coffee, tea, and lots of water since it was already nearly 90 degrees. Many of the penguins were swimming... ...but the cormorants gobbled up most of their fish. The zoo staff explained that because it was so early and so hot, the penguins were just not that hungry. This moulting penguin appeared to wish for air conditioning as much as we did. After the volunteer with Ascot repeatedly had her hand bitten... ...Ascot got put back into her carrier. Apparently they had to chase her out of the pool to bring her in the first place. The zoo provided information about the rescue group SANCCOB and the lives of the penguins at the Maryland Zoo. The adults were given coffee mugs as souvenirs while the kids were given stuffed penguins. 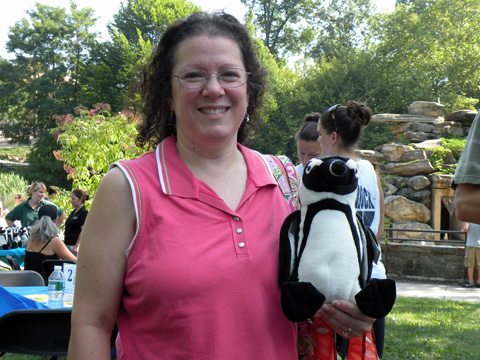 Some of the adults managed to beg a stuffed penguin, too. We also got information packets and coloring books. Kids also got to practice catching fish like a penguin would. These are the two youngest penguins currently at Rock Island -- sisters who preferred each other's company out of the 50 or so penguins living there.