Along the River and Canal 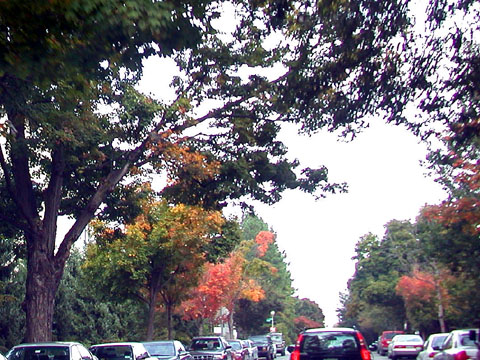 Here's some color along Reservoir Road. It's hard to take a photo of the actual reservoir, which is very pretty, encircled by trees and with waterfowl sitting on the concrete barriers inside, because of all the fences around it. 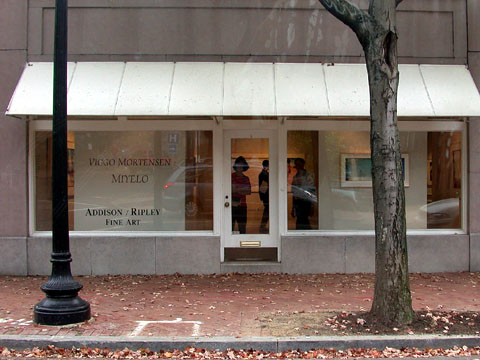 Here is the Addison/Ripley Fine Art gallery where, as you can see, Viggo Mortensen's Miyelo photographs are on display. The size and colors are amazing, particularly in the long exposure Ghost Dance images. Viggo said that the images are meant to represent the idea that "we communicate, at best, as outlines and silhouettes to each other; blurry vanishing tracings of what we really see, feel and mean." 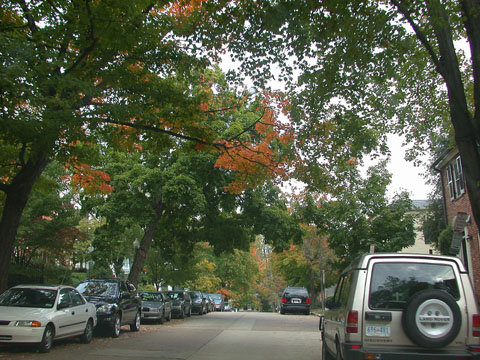 Here's the street we parked on, across Wisconsin Avenue from the gallery. 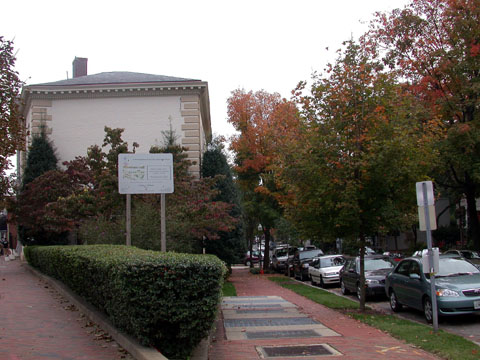 The gallery's at Reservoir and Wisconsin, a very pretty corner in a neighborhood full of antique stores and places to eat. 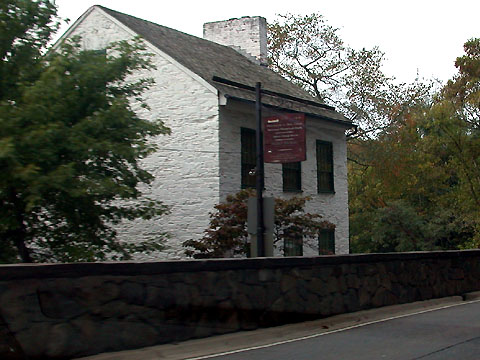 This is one of the old lock houses along the canal (photo taken from inside the car after 5:30 p.m. when it was already getting dark, hence the blurring). 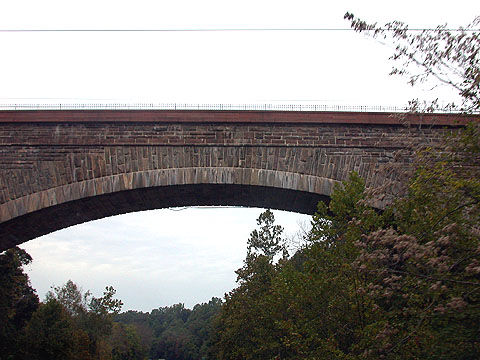 This is the "high road" going over the "low road" as they called it on the CB radio (the "Canal Road Bums" were what the DC commuters called themselves) before everyone got onboard navigation systems and wireless traffic updates instead. That's Macarthur Boulevard narrowed to a single lane at this old stone bridge that takes it over the Cabin John Parkway. The bridge contains a conduit to the Washington aqueduct. 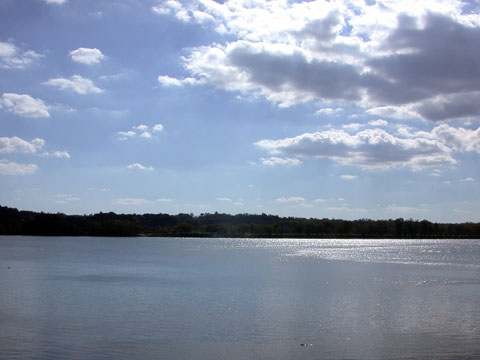 This is the Potomac River at the Seneca Aqueduct, where Seneca Creek crosses the bed of the C&O Canal and flows into the river. The river was so bright it was hard to look at -- beautiful, but no help whatsoever for my head. 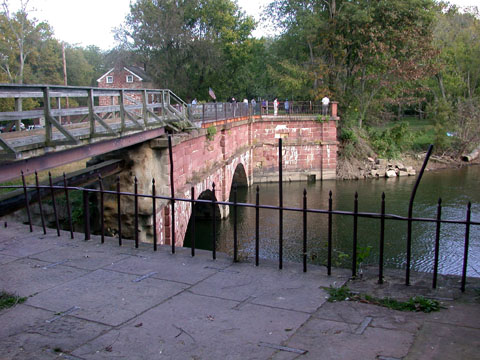 Here is the aqueduct bridge itself, damaged in a flood and never fully restored. The house in the background is Riley's Lockhouse, now managed by the Girl Scouts who give tours, churn butter and exhibit 19th century quilts. We took the tour and got to sample the homemade butter. 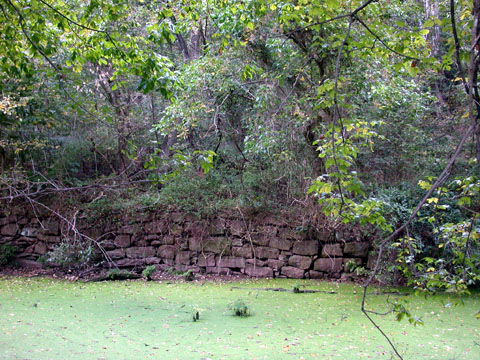 The C&O Canal here is thick with weeds in places, covered with leaves in others and coated with surface growth in spots like this one. 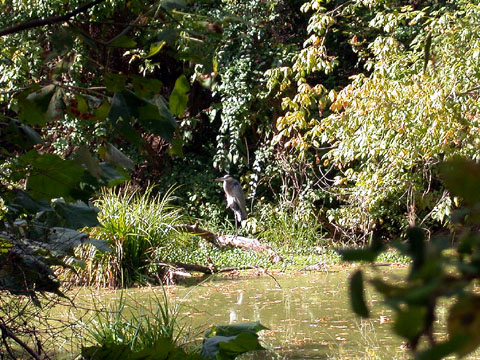 This creates fertile little ponds full of fish, which attract herons like this blue one. 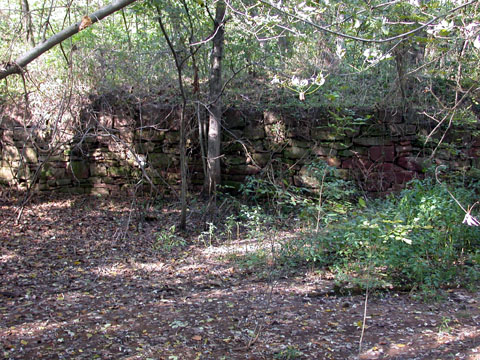 There are also areas where the canal is entirely dry, including this section just by the towpath, and in front of the lockhouse where the water has been dammed above the aqueduct. 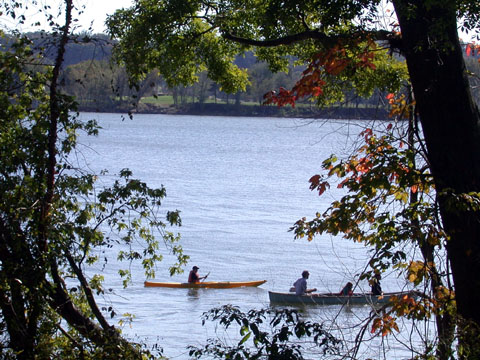 The leaves are only just beginning to turn around here, which makes this perfect weather for canoeing and kayaking on this smooth part of the Potomac -- compare this to a few miles downriver at Great Falls! 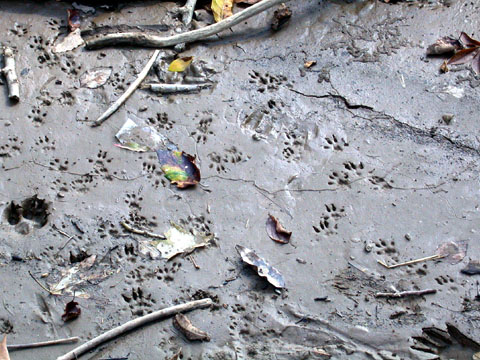 A wide variety of animals live in the woods, from squirrels and chipmunks to snakes and frogs to deer, raccoon, rabbits and a great many birds. 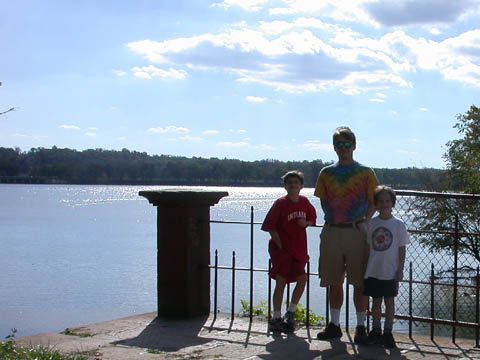 Here are the boys with the river behind them.