The Empire State Building from New Jersey with the Meadowlands grasses partially obscuring the view.

Church, cross and cloud from the highway, Waterbury, Connecticut.

The state house in Hartford, where we spent most of the first full day of the trip. First we drove to Gloria Dei church in Bristol, where my father in law was pastor for 15 years, and past the house where they lived from the time Paul and I started dating until 2001.

From there we went to the playground behind the local middle school where we used to take the kids to play. None of the museums opened till noon, so we figured it would be good if they burned off some energy, and I wanted to walk to the lake behind the school where I used to see frogs and turtles and ducks (and did again). After half an hour there, it was not even eleven, so we went over to the West Hartford Reservoir to take a serious hike.

My brilliant husband had remembered the loop as being about a mile around and it was only when we were halfway around it that we learned it was, in fact, nearly three miles, but it was a gorgeous day to be hiking, the paths around the reservoir are gorgeous and the kids did a lot of running.

We picnicked near the reservoir, then drove to the Science Center of Connecticut. Here it is with its famous enormous model of a sperm whale, Connecticut's state animal, out front.

There's a pendulum, a room full of different kinds of turtles and tortoises, another large area with animals (we saw a demonstration with a blue-tongued skink, and lots of snakes, bobcats, small rodents, etc.), a planetarium, a computer lab, and they had an exhibit of animatronic whales. But my favorite thing there has always been the kaleidoscope room. This is a room about six feet high and six feet long, ending with an inverted pyramid of mirrors, where people can wave different wands in front of a camera and change the light images projected and reflected like a giant kaleidoscope, while classical music is playing. It is one of the most relaxing places I've been. From here we drove to the Wadsworth Atheneum, which is undergoing repairs to the outside and doesn't allow photography in the galleries inside, where one can see Hunt's Lady of Shalott and Hudson River School artists among many others. 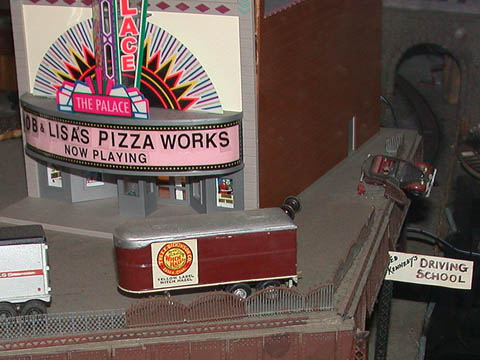 Finally, we drove to Old Saybrook Pizza Works, which has enormous model train layouts all across the top floor and a larger scale train running on the first floor. The models include a Godzilla, WWII fighter jets, and the movie theater visible in this photo, but what we really appreciated was the Ted Kennedy Driving School situated right on the water.